After quite some time I now finished another tank hunter, the Nashorn. Featuring the long-barreled 88mm Pak43, this was also one of the mounted anti-tank guns, but now built on a tailored base (the Geschützwagen III/IV).

There are numerous pictures of the original vehicle available, and I got inspired by one showing a dispatch rider handing some message to a Nashorn commander. There is actually a figure set available from the Russian manufacturer Stalingrad, featuring six resin figures plus a very nicely crafted horse. As kit I chose the AFV offering, adding a PE set from Voyager models. The idea then was to depict a Nashorn of schwere Panzerjaegerabteilung 519 in winter withewash, located near Vitebsk (Belarus) in January 1944.

The build itself took some time, with many thoughts going into what should be build and painted when. To me, open-roof combat vehicles are both a blessing and a curse, as you can depict many many details, but the assembly just takes a lot of time.

Especially the gun shield took some time, as I ended up using the kit plastic part, with the PE part having the wrong shape.

The whitewash was executed using hairspray, painting and weathering went on quite fine.

The figures have nice poses and are a really good addition to the vehicle. The only downside of Stalingrad figures is that they don’t have the quality of e.g. Alpine offerings, so some cleanup using Magic Sculpt was required. There is one guy wearing a hood over his head, and the face was so badly moulded that I cut of the head, replaced it with an Hornet offering and resculpted the hood.

I placed the vehicle on a self made base, depicting a muddy road with remnants of snow.

The vehicle was almost finished some time ago, I now added two figures from a Royal Model set, and put the tank to the base as well.

After finishing the building and the base, I added some civilian figures from MK 35 and Stalingrad. They fit the scene quite nicely.

In between I was busy at work, but also managed to start a new build – a Takom Jagdpanther with interior. This was actually a very time consuming excercise, interesting and challenging, but unfortunately nothing at all of the interior will remain visible, as I will place the tank into a small scene again. At least, I left the roof of the fighting removable, so that I am able to take a look into the vehicle again. The tank is now almost finished, with only some dust effects and finishing touches left.

The Jagdpanther is from schwere Panzerjaeger-Abteilung 654, and the scene will depict the vehicle driving through a French town in late summer 1944. So I spent some more time on creating a base, which consists of a partly displayed house located at a street. All was more or less scratch built from plaster, with the doors and shutters made from styrene sheet.

This is the result so far:

Now I will add some figures depicting civilian refugees, and of course the Jagdpanther with some crew members.

In between I also finished a Jagdpanzer 38(t), also known as “Hetzer”. The kit is from Tamiya, with a PE set from Aber. I also tried some masks from MXpression, which resemble the factory applied hard-edged camo schemes quite well. As the side walls of the Hetzer do not have that many add-ons like tool clamps etc., I sprayed the model already quite early, before attaching the tools, exhaust etc. This worked quite well, but still the masks are quite stiff, so I can not imagine how to apply the masks on a model that has all details already attached to it.

The figures are from Alpine.

I also finished this one over the summer. The sand camo was done using the hairspray method, and the weathering was kept very soft. The two figures are from Doug’s Originals and fit quite well to the scene. 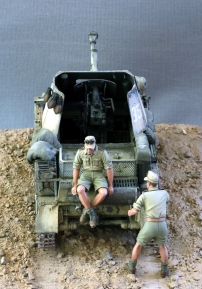 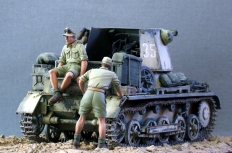 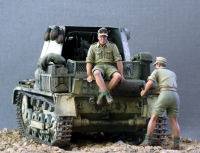 Over the summer break, I finished the Marder II scene. I found a historical picture showing a Marder driving through a sunflower field quite inspiring, so I built and painted quite a lot of Aber sunflowers (I lost count, but I think I added 60 or 70 if them). They look ok, but only if you look at them from their front side.

I also added two Alpine figures, depicting tankers in summer look, only wearing shirts. After all, the built took some time, as expected for an open vehicle, but the wealth of details really looks interesting, and you also get a good feeling for the real vehicle. The 75mm PaK looks quite big and very dominant on the rather fragile Panzer II chassis, I think this impression is even more evident if you look at a Marder I (the PaK on top of a even smaller French Hotchkiss or Lorraine chassis).

Below I added some pictures of the finished model.

In the meantime, I added the ammunition boxes on the back of the vehicle, as well as the drivers compartment. I also finished the side armors, which were painted and weathered inside, and then added to the hull. Before I will mount the main gun, I decided to finish the running gear first to minimize the need for handling the model with the gun mounted. Due to the very open construction, the build is a constant iteration from building to painting to building again.

So I started to add mud and dust, and also worked on a set of Friul tracks.

The mud texture consists of a mixture from acrylic paint, artists’ acrylic medium, real earth and plaster. After having tried some readily mixed diorama mud products, I am quite sure that these are also based on simple artists’ acrylic medium. So it is a much more flexible approach to create this on your own, and also the earth texture can be varied and better controlled by mixing it yourself. The plaster is also a quite useful ingredient, as it helps to add texture as well and guarantees a dead matt finish of the mud.

Still working on the Marder II, I started to build the next open top tank hunter, the very first of its kind: the Panzerjaeger I. This vehicle consisted of a Chech 47mm anti tank gun mounted on a Panzer I B chassis, and was manufactured from 1940 to 1941. Despite its obvious shortcomings, being under-motorized, providing not enough space and minimal protection for the crew, it still was a effective weapon not only used against enemy tanks, but also against machine gun nests or buildings.

The kit is from Dragon, with an extensive array of Aber sets available. I also bought the upper hull, the basic set and fenders from Aber. As with the Marder, I started building the interior that will be completely painted and weathered, before I glue the hull parts together and finish the build. The interior is simpler than the one from the Marder, and a lot of nice details like the vision ports are contained in the Aber sets.

This is the current state of the build: 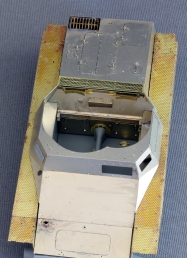 I continued to work on the Marder, and started to paint and weather the interior. I also sculpted a driver figure, which I placed on the drivers’ seat. Unfortunately, the figure will be mostly invisible after further closing the drivers’ compartment.

This is the current state of the project.